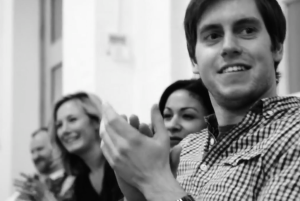 Scottish composer and lyricist Michael Bruce writes for theatre in the West End and Broadway and his new musical, based on the film The Illusionist is premiering in Toyko in January 2021.

His recent work includes productions of Antony and Cleopatra with Ralph Fiennes and Sophie Okonedo, Man and Superman, Twelfth Night and The Beaux’ Stratagem at the National Theatre, Timon of Athens, The Two Gentlemen of Verona and Candide for the Royal Shakespeare Company and The Vote, broadcast live on More4 on election night 2015.

Michael was formerly composer-in-residence at the Donmar Warehouse, where he wrote scores for plays including Measure for Measure, The Recruiting Officer, Philadelphia, Here I Come! and Coriolanus.

Trained at Paul McCartney’s Liverpool Institute for Performing Arts, Michael’s other credits include Sonia Friedman’s Much Ado About Nothing with David Tennant and Catherine Tate in the West End; Other Desert Cities and Noises Off at the Old Vic; Privacy at the Public Theater in New York; and The Winslow Boy and Les Liaisons Dangereuses on Broadway.

Michael’s debut musical theatre album Unwritten Songs entered the iTunes vocal chart at number 1 and the video for his song Portrait of a Princess has received over three quarters of a million views on Youtube. His book Writing Music for the Stage was published by Nick Hern in 2016.